Last week Matthew Hallock, Chair of the Theater Department at Centre College, and I were invited to talk with Rose Bruford College in England about the College Collaboration Project. Rose Bruford has an exchange program with Centre and was interested in sharing with their students the value of developing a new script with the intent of generating a conversation thru the process.

Matthew and I facilitated a class for two days and we were part of a panel talking about play development. The panel also included Rick St. Peter from Clemson University andReginald Edmund, founder of Black Lives, Black Words. Reggie has produced Black Lives, Black Words across the US, which premiered in Chicago, July 2015. It is an ongoing international project that explores the black diaspora’s experiences in some of the largest multicultural cities in the world, Chicago, Minneapolis, Cleveland, Toronto and London. Over sixty Black writers from the UK, USA, and Canada have written short plays to address Black issues today.  It is a ‘pop up’ model of art – at major theater institutions.

What I value the most about the College Collaboration is the long conversation that the year and a half long process of developing the play offers all involved. Sitting on the panel next to Reggie, a self defined ‘cultural terrorist’, talking about creating these events was fascinating. Both programs were inspiring conversation through plays, empowering  participants, and they were different models for getting worked produced. They both use your voice thru the development of art to spark conversation, representation, and change. Listening to the Rock N Roll model of the one night only event of Black Lives, Black Words model – I thought that’s cool! 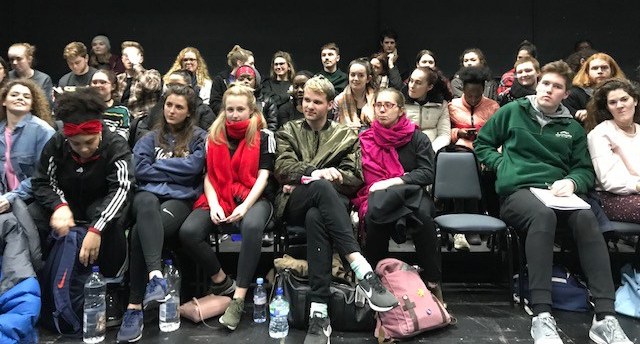 It is a model that is being used a lot now by new theater companies. The ten minute play or the monologue on a theme. Or the Poetry slam or hip hop theater. It’s exciting. Inspiring – and gets a lot of people creating. The energy is fantastic. And it builds community.

Talking about how the college collaboration develops a play over a year and a half thru the contribution of multiple communities felt important. But it also felt a little less exciting. Less cool. Less immediate.

One of the primary goals of The Farm is to create access for all who may not have a link to the established pipelines of support in our industry.  Sitting in that discussion – everyone on the panel was valued but I also felt part of the establishment. What I felt in the discussion was interest, but also a strong sense of immediacy, urgency, and impatience. A feeling of ‘now’ – I want to do it ‘now’. I want to know how to do it ‘now’. I want to know that my career will work out ‘now’.

Throughout our stay, I realized that that they are doing it now, they all are beginning their careers now, they are all learning now. It’s already happening. We’re in the mix together – right now. 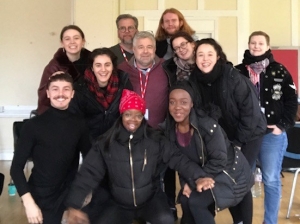 The other said, “students are always told to take a risk. How can you do that – and what stops you from doing it?” Matthew answered this one brilliantly. And I hope I represent it well, but he said, you’re already doing it just by asking the question here in front of a room full of people. Also, the thing that stops us is that we think that we’re impostors and that someone will find out. We’re not real artists. Someone else is an artist. Who are we to want to express our imaginings, or our thoughts and feelings? And we need to know you’re not a fraud, and that feeling doesn’t go away, but you’re not a fraud and by not letting that thought stop you – you will take a risk that will get to discover something wonderful you didn’t know was in you.

He said something like that. It resonated. Take the risk. You’re not a fraud. I want to see what’s possible and we won’t know if we don’t try.

The second day Matthew and I spent working thru Micheline’s script #Love95times with the students. They loved it. They thought it was nuanced and relevant – and true to their experience. They brought out details and nuance that are in the text that we hadn’t heard before. They were engaged and recognized how having a conversation through the development of a text that is specifically about their age group reflecting their experience is empowering. At the end of the day they had a lot of questions about play development and the best ways to go about it – and they were thinking long-term. And they wanted to participate in this program with their school. That was gratifying. Once we were in the work – I remembered, whether one night, one class, or multiple productions, the act of revolution is giving people a voice – and making sure they are heard.

It was great to be part of the conversation for those two days and I look forward to continuing the discussion.