IN THE COTTON was invited to be presented at KCACTF Region II and Morgan McGuire was invited to attend the Festival to be a respondent to the New Plays presented by students. Here is an interview with Morgan about the experience.

What was the experience like to be in the theater while 700 college students watched IN THE COTTON?

It was interesting, in the sense that, it’s a boost for the ego to hear a mass of people responding to something that you made. When it gets parsed down to other levels there are other thoughts I have about the spaces I think my work is intended for or how space can change a play. Because I think it definitely changed how the play was internalized by the audience, which shifted some of my intentions. And I think for me I have never intended my plays to be performed in spaces that large… because in a sense they become less personally confrontational. 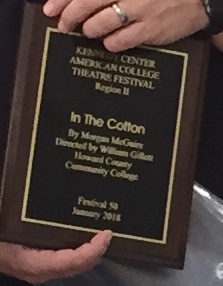 I don’t think I’ve ever written a play in which I did not want the audience to leave in an extreme state of discomfort with themselves and the people around them. When you’re laughing with almost one thousand other people you don’t have to think about yourself. You get to lull yourself into a sense of security to the point that you’ll boo and hiss at a character that if you really thought about it you’re probably more like than you’re willing to admit. And rarely do I offer myself or the audience that level of emotional catharsis. Because honestly, in these topics I don’t feel like we are deserving of it. Emotional catharsis around certain issues, apparently is something I believe to be earned by a society, not necessarily a given. Probably because people like to give themselves a catharsis and then—you know—they like to then pretend like that changes a thing and then they never do any work.

The goal was to develop the plays thru three productions. Did this additional presentation of the play confirm in you that the play was close to completion and ready to be produced outside of a developmental setting?

Is a play ever done? Sure, I feel like it’s done in the sense that I don’t feel like people need me in the room anymore to make sense of the play/characters. Do I ever feel like a play doesn’t need work? No.

Did you feel the students saw themselves in the play and felt connected to the conversation you created through the play?

Oh that feels like such a question for them… Maybe they lied to me to spare my feelings. But yeah. It sounds like they really felt like they could relate and also in the process definitely took ownership of the characters they were playing. Some of them expressed that they would have strong feelings to see anyone else play that part.

You were invited to respond to student playwrights presenting their work. How was that experience for you?

My brain is not large enough for that space. I was so impressed by my fellow responders… Because you watch all of the plays in one sitting and then give feedback. They were so organized and articulate with their note taking and I was… less so, one could say. But it was really encouraging to see so many people with really beautiful plays exploring so many themes I feel are important And was a really great example of what happens when an organization actually engages in issues of representation. I was able to see so many under represented experiences in these plays. And that was honestly, probably, the most exciting because it reminded me of the vitality and necessity of theatre and storytelling. I was changed by these stories and learned things emotionally and intellectually that I hadn’t known before. And I’m sad I haven’t seen stories like these before. It was pretty powerful.

As a playwright – what, if anything, will you carry with you from KCACTF?

To encounter so many young people who are excited about what theatre can do and be in the world was inspiring to me. I can often get bogged down in the work of making theatre and eventually it actually comes down to some weird alchemy or magic and the students seemed to have a balance of both. And it was a good reminder to believe in the good of what I do.